One of the things that bothers me so much about political discourse is the way that people paint large groups with such a broad brush. For example out of the tens of thousands of protesters this summer who protested police abuse and other social justice issues there were probably only a few hundred that only engaged in rioting, looting, and other acts of violence. Yet the entire group was characterized as lawless people.

As I watched the events of January 6 around the US capital I tried to apply my own standards to the Trump supporters. While I was appalled at the couple of hundred violent people who stormed the building killing a capital police officer, terrorizing those inside, and violating the sanctity of “the people’s house”, I tried to keep perspective that outside were thousands more who would doing nothing more than cheering, waving flags, and exercising First Amendment rights of protest. I wasn’t going to paint all Trump supporters as being violent thugs.

As I looked at the people outside the capital they looked like ordinary middle class citizens. Soccer moms and Little League dads who had been unfortunately duped into believing that democracy was under attack by progressives who had stolen the election. I had sympathy for them because I knew they would be characterized in the same vein as those who had actually stormed the building. These were not shirtless tattooed people with face paint and a Viking horned helmet on. 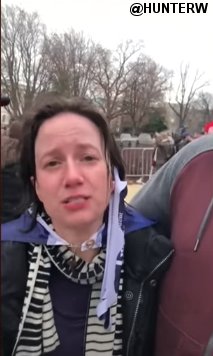 Then last night I watched “A Late Show with Stephen Colbert” in which he made fun of the Trump supporters who were stupid enough to identify themselves through social media posts and interviews. He then showed a video clip of a woman who appeared to be maybe 30 years old. Nicely dressed in a nice coat and a stylish scarf that looks like a piano keyboard. She was sobbing severely saying “They maced me!” I immediately had sympathy for her. Here was one of these innocently duped soccer moms who had gotten caught up in the crowd and had suffered being maced for trying to express her beliefs. She said she sat one foot inside the building and they maced her. She went on to identify herself as “Elizabeth from Knoxville Tennessee”. The fact that she had identified herself was part of the reason Colbert was making fun of her which I thought was kind of funny as well. Yet my heart went out to her. And then the reporter asked “And why did you want to go in?” To which she replied in a tone implying that the answer was obvious but she answered anyway “We’re storming the capital! It’s a revolution!”

Okay now I get it.

Even though she did attempt to step inside the building while thousands of others remain peacefully outside, it opened my eyes to the fact that this was not some gun toting, Molotov cocktail wielding, burn it all down, antiestablishment, militia member yet she still believed sincerely that she was taking part in a revolution against a duly elected government.

While it doesn’t say much for the strength of your “revolution” if a little spritz of mace is going to send you running away sobbing, it does tell me that you need not be an extremely radical antigovernment nut job to sincerely have believed that the government needed to be overthrown.

Granted she did try to enter the building while others stayed outside so there is that distinction. So I’m trying hard not to characterize the thousands who stood outside doing nothing but waving flags and chanting Trump with the same broad strokes of the shirtless, face painted, horned idiots who actually pranced around inside the building vandalizing the place and terrorizing Congress and the staff. But the idea that such ordinary looking people truly believes they were participating in a revolution is probably what scares me the most. Trump will be gone in another 12 days (or sooner). Congress completed its work. Democracy survived as I always was confident it would. But something is really, really wrong in America. Way too many people are too gullible and too willing to participate in a cult of personality.

In a previous blog here I said that Trump didn’t collude with Russia because he didn’t need to. Russia was completely capable of “interfering” in our election without him. And I also somewhat absolved Russia from blame for merely exploiting the gullibility of the American voters to believe such disinformation. I blamed our education system who has not taught us to be critical thinkers nor instilled in us a deep understanding of how democracy is supposed to work. I continue to think that it is a lack of education in these areas that is the real root cause of our problems. That is not to exonerate responsibility from those such as Trump, his co-conspirators in Congress, or even the Russians who are exploiting this weakness in American society.

The link below is the Stephen Colbert routine from January 7 that I spoke about above. I’ve queued it up to the “Piano Scarf Lady” about seven minutes in but you might want to watch the entire 11 minute clip of Colbert’s routine. It’s pretty funny.

This site uses Akismet to reduce spam. Learn how your comment data is processed.