You are here: Cyborg5 Home > CY's Political Pondering > I Unfriended a Trumper Against My Own Policies

I had promised myself that I would never unfriend someone on Facebook over their political views but I violated my own policy today. I had promised myself that I would only unfriend someone who was blatantly racist, homophobic, or blatantly attacked someone’s religious beliefs such as anti-Semitism or anti-Islamic posts. I guess it’s because I had too much faith in people to be able to engage in rational discussion. I always hope that even if I can’t change someone’s mind, I can convince them to seek the truth and to respect my own beliefs. But a guy that I went to school with who I barely knew posted a message on Facebook today that just pushed me over the edge and I had to unfriend him.

I try so hard to show respect to people with opposite views. I’ll attack their views but I don’t get personal. But in this circumstance unfortunately the behavior of this acquaintance (never really was a friend) pushed me to the limit and behaved in a way that confirms the worst stereotypes about Trump supporters.

Those who know me know that I’m unapologetically liberal, progressive, Democrat etc. and that I enjoy a good political debate. While some people refuse to engage people with opposite political views, I like a good argument. Rather than routinely unfriend people with whom I disagree, I challenge them to defend their position. They don’t necessarily need to agree with my positions. Just provide the evidence for yours.

The typical response I get is a big case of “What-About-ism”. Whatever I accuse Trump or the Republicans who support him of doing the counterargument is invariably What about Biden-Hillary-emails-Benghazi etc. etc. which I always say if they did anything really wrong then call a grand jury and try to get them indicted and tried. After all Atty. Gen. Barr has proven himself to be pretty much in Trump’s pocket. But that still doesn’t excuse the things Trump did. 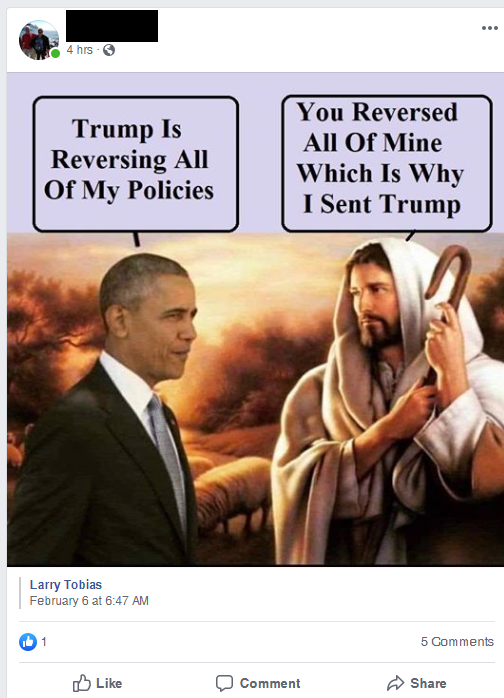 Of course the idea that somehow being a good Christian means that you have to be against Obama and in favor of Trump is patently ridiculous to me for a number of reasons. One of the things I like about candidate Pete Buttigieg is his position that one political party can’t claim a monopoly on Christianity especially when so many of their policies seem contrary to the gospel values of caring for the poor and the weakest among us. But anyway… rather than just go off the deep end and start ranting about the ridiculousness of the whole premise of the meme, I decided to challenge the poster to defend their position. What specifically has Obama done that is contrary to Christian teaching and compare that to Trump. I should have also asked what specifically has Trump done to reverse that situation? How has he brought back Christianity to the horrific policies of the previous investigation but I didn’t think to ask that. Here is an exact quote of what I replied.

Rollback environmental regulations. Made friends with brutal dictators (not in a good way). Put children in cages under deplorable conditions. Filed suit to have Obama care overturned which would have put millions of people without health care. Has lied more than 16,000 times since he’s taken office (as of January this year). At a recent prayer breakfast when the minister gave a sermon about “love your enemies”, Trump’s response was “I’m sorry Rev., I don’t think I can do that.” And then trashed Nancy Pelosi for saying that she prays for him. And trashed Mitt Romney for following his conscience after swearing an oath to God. Trump budgets have proposed cuts to all sorts of social safety net programs that affect the poor. Despite the gospel call to welcome strangers he routinely trashes immigrants falsely claiming that they are all murderers and rapists. Even those who are legitimately fleeing persecution in their home countries he is refusing to treat them any humane way.

Obama told one major lie “If you like your healthcare you can keep it” an extremely small percentage of people had to change health care plans after Obama care. He used some indiscriminate drone strikes against terrorists that probably killed some innocent people with collateral damage. That’s the only negative things I can think about Obama and his entire eight years.

I used a tactic that I often do in political debates in that I make brief arguments against my own people. In this case I thought of a pretty big lie that Obama told. By the way when I talk about politicians lying, I separate out broken promises from outright lies. For example Obama said he would close the detention facility at Guantánamo Bay. He didn’t do it because Congress wouldn’t let him. Failure to deliver on a promise I see as different from a lie. On the other side Trump said that Mexico would pay for the wall. I don’t look at that as a lie. I never believed it would happen as did anybody else who can think rationally. But it’s a broken promise and not a lie. Stretching for something else to accuse Obama of I wasn’t particularly fond of his indiscriminate use of drones to kill terrorists. So I may have someone exaggerated my dislike of that policy because it was the only other thing I can think of that remotely was contrary to my Christian beliefs.

I always take the opportunity to criticize my side or perhaps partially agree with criticisms of my side because I want to distinguish myself as different from those who blindly follow EVERYTHING that their political heroes proposed.

My final challenge was “Enlighten me.” Basically okay dude… drive up. Show me your cards. Show me your winning hand. Make your case.

I expected more What-About-isms such as Bill Clinton’s infidelity, accusations that Hillary and/or the Clinton Foundation were corrupt, perhaps what about Hunter Biden etc. Those are the kinds of arguments I usually get in return from my Trump supporting acquaintances. Of course those are all deflections from the real point we were discussing but I’m used to it. It just gives me another opportunity to come back at them and say get back on topic and don’t do What-About-isms. But that’s not what I got. Here’s the exact quote of his reply.

REALLY? That’s the best can do is call me an idiot? It is so hard to not personally attack someone who behaves in such an (pardon me) idiotic manner. How do you take the high road? How do you respect the person you are debating when the best they can do is call you an idiot? How do you try not to stereotype Trump supporters when you get a response like that? He makes reference to other Facebook friends who also think I’m an idiot. I think I know who he is referring to. That guy frequently gets in political debates with me but we manage to keep it civil and reasonably rational. He often tries to rise to my challenges to prove his point. And while we vehemently disagree with each other I don’t think he has ever called me an idiot. I think the only thing he has ever accused me of is being seriously uninformed. That doesn’t mean either of us is going to change the other ones mind but at the end of the day I can respect him for at least trying to discuss the issues.

I really didn’t know what to do. I thought I would give him one more chance so I replied…

I challenge you to come up with a rational argument to support the position you posted. I post what I believe to be a rational argument against your post. And your only response is to call me an idiot. How do you expect me to take you seriously if that’s the most intelligent thing that you can come up with in response. I repeat what I said before. Enlighten me. Explain to me why the premise of your post is true. You don’t have to buy my counterarguments but I challenge you to defend your own position with specific examples of how Obama’s policies were contrary to Christian teaching. And try to do so without personally attacking me or any other Democrats or liberals. Defend your position. Don’t just call people names. I didn’t attack you personally.

He replied less than a minute later…

To which I replied…

So I captured the image, copied the comments, and unfriended him. It really pissed me off that I had to do it. I want so much to believe in people. I refuse to think he represents all Trump supporters but then I guess I’m idealistic.

1 thought on “I Unfriended a Trumper Against My Own Policies”

This site uses Akismet to reduce spam. Learn how your comment data is processed.